With the holiday season fast approaching it’s time to start getting in the spirit! At LUX, we love to celebrate the tradition and cultural origination behind things, so we thought we share one of our favorite holiday recipes! Mulled wine can be enjoyed during holiday parties, family celebrations, and more! We’ll even teach you how to make a non-alcoholic version too!

There are as many recipes for mulled wine as there are names to designate it – far too many to count. This easy, delicious, and cozy concoction varies from one culture to another, each adding local ingredients to the original recipe. This also means that it’s highly customizable according to each and everyone’s taste! But if you’re curious like us, you might still want to find out how it was originally made according to history and tradition, and why we drink it at Christmas time!

Where does the mulled wine come from?
Mulled wine goes way back to the Roman Empire in the year 20 AD – it was made from boiled wine, honey, pepper, laurel, saffron, and dates, and was quite bitter! It resurfaced in 12th century Europe, where it was particularly appreciated by the Nordic countries.

Why do we drink it at Christmas?
The tradition of drinking mulled wine during the Holiday season only appeared in the 1890’s thanks to the German Weihnachtsmarkt (Christmas market). Sellers started serving this hot beverage to warm people up in the frigid weather. Each vendor in the market had their own recipe, and it became a competition of who had the tastiest recipe and the prettiest, most festive glassware, which made it wildly popular among the market goers!

What is the original recipe?
The “original” recipe from the 12th century was written down by Arnaud de Villeneuve, a French doctor. It simply called for dry red wine, cinnamon, orange slices, and brown sugar all boiled together. As we have the Germans to thank for creating this heartwarming and festive tradition, we will share a Glühwein (“shiny wine”) recipe and a non-alcoholic alternative, which was served to children at the markets in Germany. 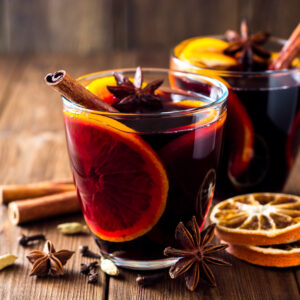 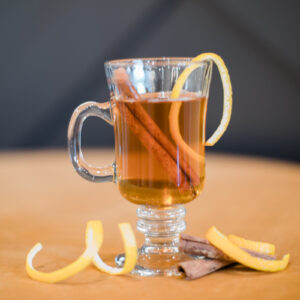